What Chief Moomen and his team have done is to establish a series that has started off brilliantly in capturing the intriguing, deep-rooted and expansive history of our land into the exhilarating artistic forms of dance, music, drama and poetry. The 150+ cast and crew in Wogbɛ Jɛkɛ have lifted the key pages in our social studies and history books and provided the younger generation with a powerfully live picture of where we have come from and the toils of our forebears in getting us here. 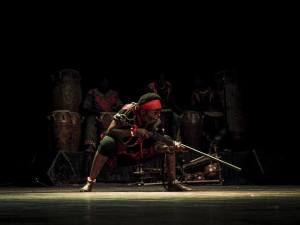 The Heritage Theatre Series, proudly backed by Unilever’s Key Soap and a plethora of Ghanaian media outlets and others is a theatre experience put together by Chief Moomen with artistic direction and support coming from Sapphire (where KSM and his sister Anima work) and lecturers as well as students of the School of Performing Arts of the University of Ghana. The first in the series was subtitled Wogbɛ Jɛkɛ and it captured the Ghana story from its roots across the Nile through the birth of the Malian empire among others and the wars and territorial acquisitions by the Mamprusis and Gonjas and Dagombas among others in the North; the Ashanti and Denkyiras and Bono in the middle belt with the coastal wars between the Akwamus and Gas and the intelligent escape of the Ewes from the wicked King Agokoli and ends with the coming of the Europeans.

Folks that appreciate history and the arts will find that Wogbɛ jɛkɛ does a fantastic job in telling multiple stories in a sweeping two and half hours mixed with live choral music, energetic drumming and pre-recorded sound effects converging in a crescendo that leaves a good imagery in the mind. 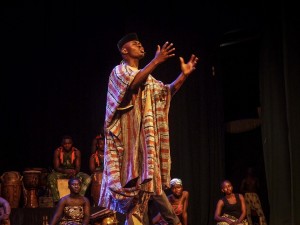 The show was not without challenges, however. But I must say the intensity of the dances and music and poetry and acting was enough to make some of these challenges seem insignificant to the regular theatre goer.

Lighting could have been better. There were scenes where the light controller seemed uncertain where to focus his beams on.

I don’t know how many microphones were deployed but I reckon there were a lot of them. Control of so many of these proved challenging at various times coupled with the fact that the sound output at some point was not top quality.

The pressures on the National Theatre building itself means that performers rarely get ample time to rehearse. This showed a bit as the initial stages of the performance did not gel so well. As they performed scene after scene and act after act though, cohesion became better and I liked it.

I know a lot of actors who admit that the stage is a very demanding part of the job. It is not like film where a director can yell ‘cut let’s take it again’. The stage is live and it is tough. The narrators did a good job. I get the sense though that they didn’t bring their ‘A’ game on. Once again an initial seeming lack of cohesion was overcome to the credit of the two gentlemen and lady. One of the reasons I respect their craft is that I probably never acted at Legon because I was a failure in memorizing lines. They did it well.

I am very expectant of the second in the instalment of the Heritage Theatre Series particularly after hearing and seeing the near perfect Kwame Nkrumah look-alike. I sincerely wished it was possible to take this performance to every regional and district capital but where will they perform in Nsawkaw or Wa? That’s another discussion for another day. But hopefully it will be shown on TV at some point. But trust me, there’s no experience like a live theatre experience and the cast and crew of the Heritage Theatre Series led by Chief Moomen brought this home and in some style.

It was themed Adult Content, and each person that held the microphone on the night had clearly received the memo, …